Wow! Completely by chance, the past three days have been full of bird-related activities, and I couldn’t be happier. Here’s a quick rundown of all of the exciting events!

On my weekly Naturalists morning walk, we headed over to a seemingly unexciting spot—a parking lot for a hospital, with some surrounding woods—and ended up seeing quite a few birds! Cardinals, chickadees, tufted titmice, and my FAVORITE kind of duck—wood ducks! A great way to start this unofficial bird extravaganza.

A little later, after zooming through my chem lab in record time, I headed over to Reed House, which was hosting its annual “Owls of Maine” event!! A Chewonki representative gave us the rundown—what owls live in Maine, how they hunt, what they sound like, etc—before bringing out three GORGEOUS live owls. Boo, a saw-whet owl, was barely the size of my hand! The other two were Varia, a familiar-looking barred owl, and Sparky, a beautiful great horned owl. I was close enough to touch them. What an experience!! (I ended up being fifteen minutes late to chamber choir, but it was so worth it!)

Friday was definitely the highlight of this bird-filled weekend. It was another Field Note Friday—read about my first one here—that just so happened to be birding-related!

A handful of other students and I met up in the ecology lab to grab binoculars before piling into a van with my lab instructor, Shana, to drive to Nat Wheelwright’s house. He’s a retired biology professor who specialized in ornithology and ecology—I wish I’d been around to take his classes.

This was actually my second time at his house, since the Naturalists took a trip out there after winter break to search Nat’s pond for creatures living under the ice. (Check out the video!!) On Friday, though, the ice was mostly melted and sun was shining. It felt like spring! And we were there for a totally different reason—to learn about catching live birds.

There were two ways of going about this: traps and nets. The traps were simple wire boxes, baited with sunflower seeds. When we arrived, Nat had already caught some birds in the traps. He showed us how to remove a chickadee from the trap, then passed it around so everyone could hear its heartbeat! A chickadee’s heart beats about 500 times a minute—it sounded like a little motor.

After that, I was able to catch a bird myself and put it in a little bag for safekeeping! Holding this chickadee was wild—it was so soft and surprisingly warm for such a tiny thing.

We also set up a mist net, a very fine section of netting stretched across two poles. The birds can’t see it, so they fly in and get tangled up. Extricating their tiny feet from the netting was surprisingly difficult! After we’d caught several birds, Nat showed us how to band them, giving each bird a unique 9-10 digit number that could then be used to track the bird if someone were to find it dead and turn it in. 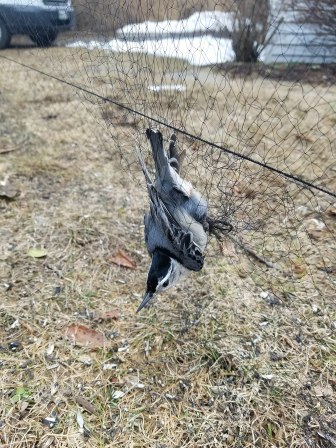 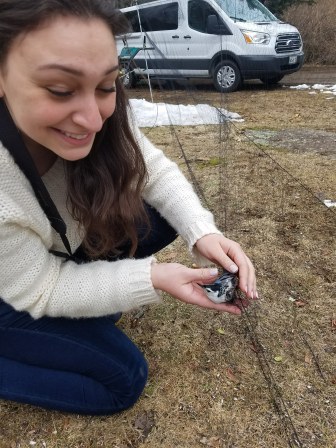 Then the rain started really coming down, so we relocated to the garage to finish banding. Nat also showed us something crazy—if you stroke a bird down the center of its chest (without touching its legs!) you can “hypnotize” it. 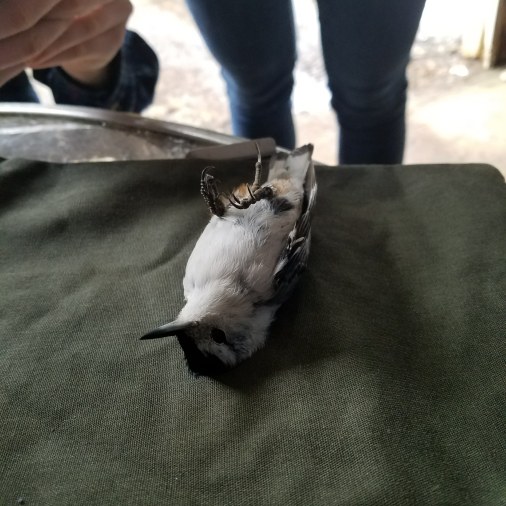 These birds were completely conscious and uninjured but temporarily immobilized until you poked them again (and said the magic words, of course) after which they would fly out of the garage. What an afternoon! I definitely learned so much in those two short hours.

But the day didn’t end there: after dinner, I returned to the ecology lab to—believe it or not—bring back my taxidermy skills in an unofficial course for some of my friends!!!

I’d received a text from James over spring break that he had recently come into possession of four crossbills and wanted my help to preserve them. If you remember, I worked as a museum intern for a year and spent a good bit of time preparing study skins. It had been almost a year since I’d done any taxidermy, but surprisingly, I hadn’t forgotten too much! Thanks to Shana, we had all the supplies we could have asked for.

After getting excited about some completed study skins stored in the ecology lab (there were quite a few, even a swan and a huge bald eagle!), we got to work. I won’t go into too much detail, but these poor roadkill birds were a little more beat-up than the ones I was used to working with. Even then, we managed to skin all four, and I’m pretty proud of how they turned out!

The best part, though, was really just the fact that I have friends who were actually interested in this and so eager to learn! It’s definitely a weird skill, but teaching everyone was super fun!!

Finally, I wrapped up this bird series with a lovely trip out to Morse Mountain with the Huntington Bird Club. We’d originally planned to go to Popham Beach, but after some miscalculations involving the tides, we drove out to Morse for a brief hike and more ocean views.

We didn’t end up seeing too many birds, but wow, what a beautiful day! I was warm in just a t-shirt?? Spring is here!

After hiking up and down the little “mountain,” we popped out on the coast at a picturesque sand beach. The wind blowing off the Atlantic was a bit chilly, but the sun was so warm. We took off our shoes and splashed around in the freezing ocean before climbing up on some rocks to soak up the sun—what a blissful way to spend the day! I was so glad I’d gone out on such a clear day. Didn’t get any work done, but it’s fine!

Now it’s back to classes and homework, but hopefully more fun bird things will keep coming up. (I have yet to stuff the skins, which will be happening this week!) But wow, what a weekend—I’m just so glad I got to spend so much time learning about and seeing birds!